At Perkins, our unrivalled expertise is built on more than 85 years of history and tradition.

The company was founded in a small office in Peterborough, UK, in 1932, with the aim of persuading manufacturers in the rapidly growing motor industry to take diesel engines for the cars and trucks they were producing. The company has grown since then into one of the world’s leading suppliers of off-highway diesel and gas engines – but it retains the dedication and the vision of its founders.

Two men with one idea

Frank was enterprising, imaginative and an energetic salesman, while Charles was an engineering genius, happiest in his workshop and away from the spotlight.

They didn’t have much money but they had complementary talents, a big idea and a vision of what that idea might become. Their focus from the start was on the diesel engine, which they believed could revolutionise the motor industry. 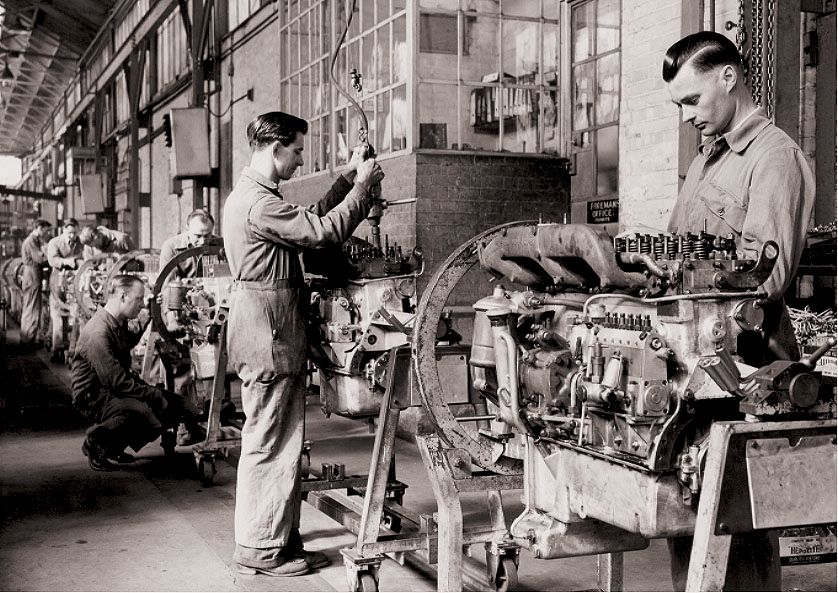 At the time, the diesel engine was a heavy, slow-revving workhorse – very much the poor relation of the petrol engine as far as the motor industry was concerned. Charles’ idea was that by redesigning it as a high-speed unit, he could give it the performance of its petrol rival, with much lower running costs.

The entrepreneurial Frank, in turn, could see the effect that such an engine would have on motor manufacturers, and he set about marketing it with extraordinary vigour. Peterborough’s excellent transport links, he knew, would mean quick deliveries, keeping waiting times for his customers to a minimum.

Soon after the company was founded, its first high-speed diesel engine appeared – the 4 cylinder Vixen. A more powerful version called The Wolf followed, and the motor manufacturer Humber began to use it in its successful Commer trucks.

Humber was the first of the Original Equipment Manufacturers (OEM) on whom the company’s success has been built.

“Perkins engineers still consult face to face with equipment manufacturers, just as they did in the 1930's, to achieve the most efficient and effective engine integration.” Mike Cullen, product marketing manager

In its first year, the company produced just 35 engines, all destined for trucks and cars. One of them was on display at the 1933 Commercial Vehicle Exhibition. Three years later, at the Brooklands racetrack in Surrey, Perkins became the first company to hold six world diesel speed records for a variety of distances. The diesel engine had arrived, and the company rapidly began to expand into the agricultural sector.

In 1947, production was moved to the Eastfield site in Peterborough. But the focus was on expansion, and six years later, Simpson and Co. of India became the first of hundreds of licensees and distributors all over the world. Perkins was on the way to becoming the global company that it is today.

Over following decades, manufacturing and parts distribution centres facilities would be opened in Europe, North and South America, and Asia. Distributors were signed up in 171 countries, with more than 3,500 outlets.

Today, a diverse and highly skilled team of employees around the world understands the specific challenges of your region and your company. Our modern manufacturing facilities and distribution centres which are located around the world, mean we remain focused, as Frank was, on fast, efficient delivery.

Wherever you are in the world, you’re always local to Perkins.

Today, Perkins has expanded from its original focus on the motor and agricultural sectors to operate in five main markets:

Links over the years with other international engineering giants, most notably Caterpillar’s acquisition of Perkins in December 1997, have helped the company develop its engine offering, unrivalled technical expertise and global reach.

With manufacturing facilities operating around the globe, we have the capacity to produce up to 800,000 units a year, ensuring Perkins remains one of the world’s leading suppliers of diesel and gas engines in the 4-2000 kW (5-2800 hp) market.

A modern company with traditional values

Perkins is built on history and tradition. We now have manufacturing and parts facilities on four continents. But we retain the original focus on the development and manufacture of engines, and the determination to use the best and most up-to-date technology to drive continual improvement in our products. We still work closely with our customers in every part of the world to achieve the best and most reliable solutions.

Today, Frank and Charles might not recognise the size and diversity of the company that has grown from their original idea. But they would be at home with our philosophy, our values, our consistently high performance, and our determination to keep the customer at the centre of everything we do.