If the P6 was the diesel engine that gained the early reputation for Perkins, then the 6.354 provided the foundation for worldwide growth through the 1960s and 1970s.

Adaptable for use in every market sector, the 6.354 was designed in the late 1950s and soon became a mainstay of Perkins production from 1961 to the late 1990s.

Designed in Peterborough, UK, the new concept offered the idea of a compact 120 bhp unit where the auxiliary drive was taken from a small jackshaft driven at engine speed from the timing gears.

This allowed the use of the new DPA fuel pump, mounted vertically and driven through a wormwheel and pinion, with the lubricating oil pump driven coaxially by a quill shaft below the wormwheel.

The extension of the jackshaft then allowed auxiliaries such as compressors, vacuum pumps or hydraulic pumps to be driven at engine speed, mounted off the cylinder block and driven through a simple flexible coupling.

Another significant change from the previous 6 cylinder engines was the introduction of direct fuel injection, using a toroidal chamber in the piston crown rather than the Aeroflow chamber in the cylinder head. This resulted in more power from the same swept volume while improving fuel economy. With accurately cast inlet ports in the head and the new CAV pump and injectors, new standards of smoke emissions were also achieved. 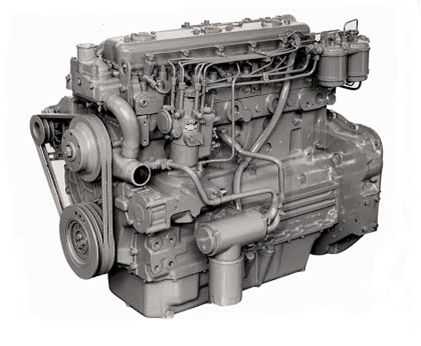 Production started in 1960, with the engine being a hit for most applications. This resulted in new versions to power trucks, tractors, industrial and marine equipment. The rating for vehicles was soon increased to 120 bhp at 2,800 rpm, whilst turbocharged versions – called the T6.354, were developed quickly for Massey Ferguson tractors, marine and industrial applications.

The marine market proved especially attractive, with inclined versions of the engine being produced to fit below cockpits. Ratings of 150 bhp for general use were available, with much more for offshore powerboat racing where Perkins established an enviable position in the late 1960s.

During this period, many changes were made to the engine to improve its durability, including revisions to the cylinder head gasket, valvetrain and piston assembly. Further changes, which included modifications to the cooling system, signalled the 'dot' series of engines. Changes of bore size were also introduced to meet Massey Ferguson requirements for engine power matched to the machine or tractor. Successive introductions to suit various market needs were the:

In the late 1970s, a major redesign of the cylinder block and head, plus changes to other components, resulted in the introduction of the 6.3544 and T6.3544 which eventually replaced all other versions. The changes included machined inlet ports and the elimination of the tappet side cover plates, bringing the appearance of the engine more in line with the 4.236 family.

Production of the 6.354 was not restricted to Peterborough. As licence agreements were signed around the world during the 60s and 70s, production of the engine began in Mexico, Argentina, Turkey, Peru, South Africa, Brazil and the USA. The 6.354 became an engine locally available to customers across the world, using some parts supplied as kits from Peterborough.

New engine applications were appearing all the time, as the easy adaptation of the engine design and the ready availability of many conversion parts made the 6.354 family the product of choice for customers both large and small.

The end of an era

By the mid 1980s the 6.354 was overtaken by the new 1000 Series. This was designed around the same basic 1 litre/cylinder but with radical changes to achieve tighter emissions standards and meet demand for metrication and the needs of a more sophisticated market.

In 1996 the last 6.354 engine came off the assembly line. More than 1 million engines were produced in Peterborough, plus significant volumes around the world. Many of these are still in use today, proving the ability of this multi-purpose engine to give reliable, economical service wherever power is needed.