At Perkins, we’re proud of all our products. Every one of the more than 22 million engines that has left our various manufacturing facilities over the years has been designed, developed and built to the highest standards. We’re committed to consistent quality.

In a history of 90 years, there are some engines that stand out as iconic – engines that have made huge steps forward in technology, or had a particular influence on the development of diesel power.

Throughout the history of the diesel engine, Perkins has been one of the most influential companies in terms of design and development. Since the very first 4 cylinder Wolf was fitted in 1933, our engineers have had the vision to see what might be possible, and the skill to make it happen.

These are some of the Perkins heritage products that have been milestones along that journey: 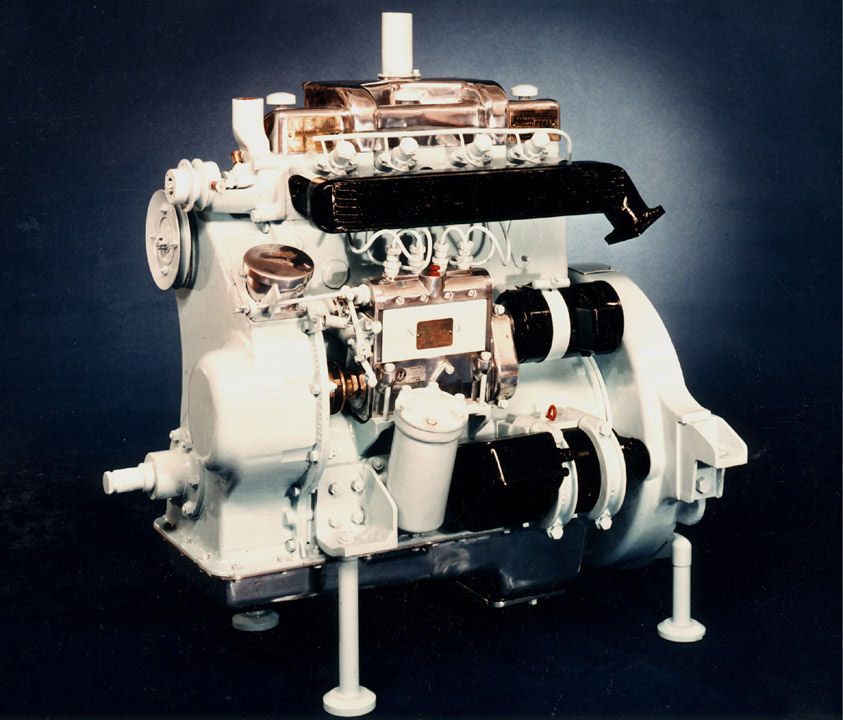 The engine that started it all. Developed from an earlier model, the Vixen, the Wolf was offered as an alternative to the petrol engine in Humber’s Commer vehicles in 1933, making Humber our first Original Equipment Manufacturer (OEM).

The P4 and P6 engines, designed by Charles Chapman, the company’s original technical director, were launched at the 1937 Commercial Motor Show. They were compact and lightweight engines that established Perkins as a major supplier. The P6, producing 63 kW (85 hp) at 2600 rpm, and advertised as “The world’s lightest diesel engine” was an immediate sensation. The P4 and P6 were the platforms for many future award-winning engines.

The 6354, the straight-six, 5.7 litre successor to the P6, became the best-known diesel engine of its day and led to a rapid growth in sales for the company. Marine versions were popular for offshore racing. A P6354 painted in gold was exhibited in 1962 as our millionth export engine.

The first 4.236 came off the production line in August 1964 – the start of a 30 year domination of the agricultural and tractor market. It went on to power 4.5 million machines throughout the world. Click here to read more about the 4.236.

“Perkins has an impressive track record that goes back more than 85 years. These iconic engines are the evidence of our lasting commitment to quality”
Annette Ward, corporate and marketing communications manager

The 1000 Series of industrial and agricultural engines was the Perkins response to a new era of emissions standards. The 4 and 6 cylinder engines covered a range from 67-134 kW (90-180 hp). A newly designed combustion chamber produced better emission control, lower noise levels and improved fuel consumption.

Emissions standards were now a vital consideration in engine design. The new 400 Series, designed to meet EU Stage II/U.S. EPA Tier 2, set new standards of quietness. It developed into a range of ultra-compact 2, 3 and 4 cylinder engines for a variety of applications in the agricultural, gardening, construction, electric power and materials handling sectors.

The 1100 Series had been launched earlier, alongside the 400 Series – and the 1100D, produced in 2003, took noise reduction, emissions control and power to new levels. Sold as “the ultimate power solution”, it met Stage IIIA/Tier 3 emissions standards.

The tradition of innovation and excellence continued with the launch in 2013 of the 1200 Series, which was designed to meet the world’s most stringent emissions standards, Stage IIIB/Tier 4 Interim. Alongside its unprecedented capacity for emissions control, the 4 and 6 cylinder 1200 Series offers improved productivity levels and lower fuel consumption, combined with a power output up to 225 kW (300 hp).

Extending its industrial engine range up to 18 litres, Perkins introduced its 1700, 2200, 2400, 2500 and 2800 Series engines to the market. The additional engine platforms take Perkins’ industrial offering into a new power bracket up to 597 kW (800 hp), giving original equipment manufacturers (OEMs) the opportunity to extend the use of our engines across their range. The new engines allow customers to downsize, while lowering cost of installation and ownership.

Perkins launched its most powerful line of electronic engines to date, delivering up to 1500 kWe emergency standby power for a range of critical applications. Optimised turbochargers enable the 5000 Series engines to deliver outstanding load acceptance—meeting ISO 8528-5 G2 and G3 standards—and the ability to accept NFPA 100 percent block load. Designed, engineered and built to provide prime and backup power, the 5000 Series has been rigorously tested for performance and durability and is proven to operate in the harshest environments.