The Seguin facility was opened in 2009, and now produces a range of engines, including the Perkins 1500 and 2000 Series. It's a world-class manufacturing facility of some 140,000 square metres, employing more than 1,200 people in the heart of Texas.

Situated midway between the cities of San Antonio and the Texas state capital Austin, Seguin is at the centre of the fast and efficient communications network of the southern United States. Within four hours' travel, there are four airports and the Gulf seaports of Port Arthur and Port Lavaca. To the south, another four hours away, is the Mexican border and access to Central America.

It's a small city with a population of around 30,000, but it has a strong pro-business climate and a vibrant manufacturing base, with companies producing such varied goods as steel, building materials and mowing and maintenance equipment. Excellent schools and colleges in the area provide a strong talent pipeline for skilled employees.

“At Seguin, we work in a small city, but we’re part of a global network, and we’re proud to be producing engines that provide the power for schools, hospitals and other institutions across the United States and throughout the world.”
Tim Flaherty, large engines general manager 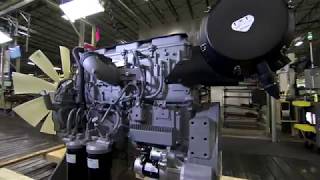 At Seguin, we manufacture the 1500 and 2000 Series engines for manufacturers of electric power generator sets both across the U.S. and for export. The new 8.8 litre 6 cylinder air-to-air turbocharged 1500 Series ElectropaK started production at Seguin earlier this year, giving Original Equipment Manufacturers (OEMs) the benefit of more power from a smaller engine.

The highly-regarded 2000 Series is known for its reliability in a harsh environment or under strenuous conditions. Production started at Seguin in January 2015.

The latest computer controlled and robotic manufacturing equipment, coupled with the Caterpillar Production System (CPS) used in all our manufacturing facilities, ensures that all the engines that leave the Seguin facility meet the same Perkins global high standards of excellence and reliability.

There are assembly, testing and painting areas, which all employ the most modern equipment to ensure consistent and reliable excellence.

A local company with global reach

With 1,200 skilled employees out of a population of 30,000, the Seguin facility is an important part of the city's manufacturing and economic base. Producing our engines locally means that we understand the specific changes facing our customers in the southern U.S. and quick and efficient local, national and international transport links mean we can cut lead times and delivery times to the absolute minimum.

You get your new Perkins engine in the fastest possible time- and of course it's backed by our dependable international service and support network.

When you deal with the team in Seguin, you're dealing with a highly trained professional team that's part of a globally consistent manufacturing network.