Gomselmash Holding in Belarus has collaborated with Perkins to develop a new high-tech harvester, the Palesse-branded GS16 aimed at large agricultural enterprises that grow high-yield grains and other threshable crops. These new high performance, reliable and efficient machines needed engines that were equally advanced and Perkins, with its worldwide reputation for engine excellence, was the only choice.

Perkins ability to support engines with its global distributor network is also important because Gomselmash exports its machines to almost 50 countries, including the Czech Republic, Slovakia, the Baltic states, Argentina, Brazil, China and South Korea. 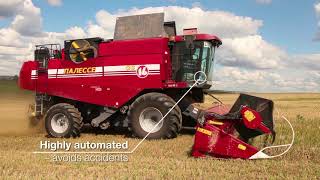 The close collaboration between Perkins and Gomselmash engineers included a Perkins generated digital model of the engine installation. That helped Gomselmash’s engineers visualise layout and design options and develop strength calculations for the machine. Once the prototype was completed, the engine installation underwent rigorous testing by Perkins to ensure that all functional specifications were met.

Gomselmash estimates that Perkins support reduced product development from three years to just one, allowing them to get their machines to market quicker and ahead of competitors.