From a manufacturer’s point of view, EU Stage V technology is well-established and now forms a significant part of Perkins’ annual production. But, the technology’s penetration in end-user markets remains varied, depending on a number of industry-specific considerations.

The rental market is a good example. A typical rental machine is in service for five to eight years before it’s replaced. That means the industry is now beginning to consider new equipment powered by engines meeting Stage V standards and, therefore, is at the beginning of a learning curve that early adopters have largely completed. That is by no means a negative observation on the rental industry, it’s simply a reflection of the economic realities of their business environment.

Perkins has a long history of powering OEM equipment used by the rental industry and understands the nuances of their business environment very well. Those nuances extend well beyond Stage V technology and include unique maintenance and support issues plus an emphasis on sustainability, all of which are important to rental operations and profitability.

The Perkins Rental Support Programme is in place to help rental industry customers deal with these, and other issues that are unique to their business. The programme is run by people who ‘speak rental’ based on industry experience and are supported by rental-specific Perkins facilities and assets.

As part of that programme, Perkins has produced a range of industry-focused informational materials to help end-users of Perkins-powered equipment smoothly transition to Stage V engines and take full advantage of their profit enhancing potential. At this point in the rental replacement cycle there are two important questions which need to be addressed: what to expect from Stage V technology; and how does it interact with the use of low carbon intensity fuel?


What to expect from Stage V?

The Stage V emission standards are currently the world’s most stringent. They are similar to U.S. EPA Tier 4 Final standards but are more restrictive in some respects. So, for the rental industry that means a single machine model can be used in North America, Europe and other locations using a Stage V engine. That greatly simplifies the logistics of parts and maintenance supplies, maintenance and service employee training and, potentially, acquisition costs through larger volume purchases of identical machines.

Meeting Stage V standards requires a combination of new technologies and significant improvement in existing ones. As a result, the new engines not only produce fewer emissions, they are also more efficient and significantly more power dense than the legacy engines they have replaced.

For end users in the rental industry and elsewhere, that means a physically smaller engine can produce as much power as a larger legacy engine and do it using less fuel. Increased power density is the key to downsizing a machine, with potential reductions in both capital and operating costs. Smaller, more efficient machines also address many sustainability concerns.

Advanced Stage V technologies have also overcome many of the operational issues associated with earlier emission reduction and aftertreatment systems. For example, on Stage V Perkins engines, regeneration of the diesel particulate filter (DPF) on engines using this technology is now completely transparent to the operator.

Many Stage V aftertreatment systems are much more compact than legacy versions and can be mounted directly on the engine. Engine Mounted Aftertreatment (EMAT) greatly reduces the physical volume of the engine system and simplifies mounting in compact machines.

While the use of Stage V engines is mandatory to meet emission standards in the EU, the technology package also offers significant advantages in power density, fuel efficiency and performance. Those advantages, taken together make a strong case for adopting Stage V engines even in the U.S. for example.

Stage V engines do require some small changes in maintenance procedures and the use of additional fluids in the form of diesel exhaust fluid (DEF). The former can be easily learned by customer personnel and are available from trained Perkins distributor technicians. The latter only requires filling a tank periodically and takes no more time than routine fuelling or pre-operational checks.

Weighed against the advantages offered by Stage V technologies, the downside of adoption is minor indeed. When those advantages are combined with the opportunity to also use low carbon intensity fuels, the case for Stage V is even more compelling.

For rental companies looking to reduce their carbon emissions, a number of renewable and low carbon intensity fuels can be used as drop- in replacements for diesel fuel. These fuels must meet the specifications and characteristics described in the engine’s Operation and Maintenance Manual to be used in Perkins engines and reduce the risk of downtime.

Low carbon intensity fuels are typically paraffinic hydrocarbons, hence these fuels, whether at 100 percent or blended, can be used as drop-in replacements for diesel fuel. These fuels have many benefits:

A pathway to sustainability

Perkins Stage V engines incorporate the most advanced technologies currently available to reduce emissions while delivering the levels of performance, efficiency and reliability Perkins users have expected for nine decades. They are supported by the same global Perkins distributor network users depend on for responsive service by highly trained technicians.

Those things are true for all users of Perkins-powered equipment including those in the rental industry and their customers. Stage V engines may be new to them, but Perkins quality, service and support certainly are not. Efficient, power dense, low emission Perkins Stage V engines that can also use renewable and low carbon intensity fuels are a big step forward to a sustainable, low-carbon future for the rental industry and everyone else who depends on Perkins power. 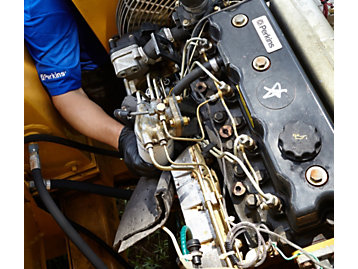 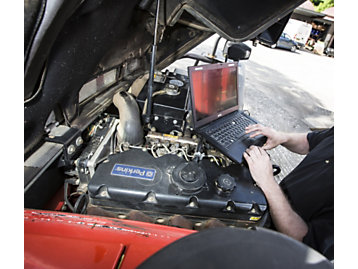