For 25 years, the annual Tractor of the Year (TOTY) award has recognised the very best in tractor design and technology, selected by a jury comprising 26 farm and machinery journalists from across Europe. Winner of the 2022 “Specialised Tractor” was the Austrian manufacturer Reform Werke, with its Metrac H75 Pro.

With a Perkins engine under its hood, Powernews takes a closer look at this agile alpine all-rounder and the decision to power it with Perkins…

Designed for extreme slopes and difficult terrain, the Metrac has been in mass production since 1965, building up a loyal customer base amongst both mountain farmers and municipal authorities. Best described as a tool carrier, the Metrac displays outstanding versatility in its ability to tackle the most difficult working positions, without compromising safety or comfort.

“As a company, Reform has always been involved in agriculture,” explains Martin Dachs, the company’s head of marketing. “Originally producing a diverse range of equipment, from slurry pumps to seed drills, fertiliser spreaders and even potato harvesters, the company really found its niche after the turmoil of the two world wars, when the Reform R1 was launched.

“Introduced in 1948, this ground-breaking motor mower was largely responsible for kick-starting the mechanisation of mountain agriculture, helping to modernise and improve what had been a very traditional, very laborious way of life,” Martin explains.

While further improvements resulted in the arrival, in 1965, of the Reform 2000 mower-rake, it was the 1968 launch of the Muli 25 that laid the foundations for today’s success. This was the first generation of a transporter not only suitable for, but specifically designed with hillside farming in mind.

“The place where a Metrac feels most at home is the side of a mountain!” laughs Martin. “Its technology is perfectly suited to mountain agriculture – understandably a very challenging environment.

“From an engineering perspective, the most important requirement is a low centre of gravity. That should be matched with outstanding hill-climbing ability and of course complete flexibility for tool attachment.

“The additional features that make Metrac so popular in the municipal sector are its superb manoeuvrability, thanks to its four-wheel steering and highly compact dimensions,” adds Martin.

Five decades of customer feedback and alpine engineering know-how went into H75 Pro, completely redesigned for its 2020 launch. Most striking – and of most interest to the operator – was the new cab, points out Martin, which was developed and manufactured in-house.

“It’s completely mechanically decoupled from the rest of the vehicle,” he says, “which significantly reduces vibrations. We took the same concept through to its ‘bigger brother’, the H95, and in both models it’s brought the noise level down to a comfortable 72dB.

“That’s about what you’d experience from travelling in a tram, or listening to a radio, and gives the H75 a best-in-class operating environment.”

Described by the engineering team as ‘a very important step into the future’ for Reform, the completely new design of the H75 also called for a new power unit.

“We knew customers would recognise and value the Perkins brand, as it carries the same values of durability and reliability that they’ve come to associate with Reform,” Martin explains.

“Perkins engines are high quality and enjoy a strong reputation for their performance in specialist machinery throughout the agricultural and municipal sectors.”

Consultation with Perkins Austrian distributor, Zeppelin Power Systems, pointed towards the Perkins® 904 Series. “As a relatively new power platform, we considered the Perkins® 904J-E28T, available in both 2.8 litre and 3.6 variants, to offer the best combination of power and torque for Reform’s needs,” says Andreas Mach, head of sales for Zeppelin.

He continues: “Reform needed a power unit that was capable of all-season performance, and which would provide sufficient power for the dual-range hydrostatic drive as well as the power-shift PTO.

“Reform’s technical team was also highly impressed with the 904’s low fuel consumption, knowing that this would play well with customers’ expectation of reduced total cost of ownership (TCO).”

Ease of maintenance is another key factor in reducing TCO, and that’s a key feature of the 904J. Its highly integrated design comes pre-installed with ECM, aftertreatment sensors and fuel filter all in easy-to-access positions.

Zeppelin’s engineering team worked closely with Perkins, BU Power Systems and Reform during the engine integration process, ensuring quick and complete access to all documentation and data for work on the prototype machines to proceed. The Perkins team even went so far as to design a special, custom flywheel for Reform in case it was required– something which Andreas says is a great example of how Perkins will dedicate its team to a customer’s machine, making it simple to match an engine to an OEM’s requirements.

“Reform’s heritage with Perkins goes back to 1970, and with the strength and experience of Perkins in the agricultural sector, we felt we were ‘going home to Perkins’ as an agricultural brand,” adds Martin.

“Such was the success of the 904J in the H75 that we’ve now extended the Perkins co-operation to further new models, the Metrac H60 and the Metrac H70, making it a clean sweep for Perkins engines across the Reform Metrac range,” he enthuses.

As for the exciting announcement of the TOTY Best Specialised Tractor Award, Martin says it was appreciated by everyone in the 500-strong workforce, not least the engineering team at HQ in Wels, Austria.

“We were very happy about it, especially because it was the first time Reform had entered the TOTY contest. It’s a huge credit to everyone who worked on the project, but also a big benefit to the brand. Every H75 now leaves the factory with a sticker on the roof, proudly proclaiming its TOTY 2022 Award!

“What’s more, it’s great that a vehicle within this category, alpine farming, was awarded the top prize. The jury clearly really appreciated the overall value of this machine, its capability and flexibility.

“It will bring the Reform name, and the H75 in particular, to the attention of a much wider, more international audience beyond our core markets of Austria, Switzerland, Italy and France.” 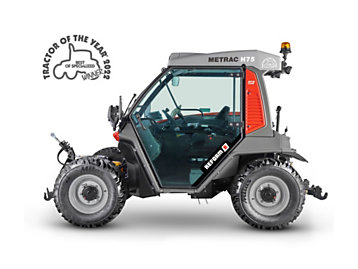 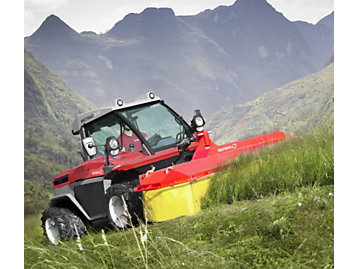