Plant manufacturers who build their own, branded machines can buy Perkins engines direct from us to use in their equipment. Among the key advantages of going down this route is instant access to proven, tried and tested technology with none of the associated research and development costs involved. The engines supplied come with full Perkins warranties and access to our distributor network.

There is no such thing as a typical self-service Original Equipment Manufacturer (OEM) customer for our engines, but certain thresholds do apply. For example, any OEM customer would need to be selling a volume sufficient enough to have the infrastructure, and on-going sales volumes in a given territory to be able to establish its presence there. On a global basis this is probably in the tens of thousands, however a more regionally focused OEM may be in the several thousands of units per annum as a starting point.

There is also a requirement on the part of the self-service OEM to commit to investing in the training needed by their own staff to support today’s engines. That support is as likely to involve the use of a laptop as it is more traditional tools as engines become ever more sophisticated and their electronic controls become an integral part of how they work. It’s vital, therefore, that the person from the OEM likely to repair or service the engine has a firm grip on the technology involved today and continues to invest in the changes going forward.

To help you achieve this, Perkins runs ‘train the trainer’ workshops complementing new product launches. This allows your service personnel to be fluent in what it takes to be able to support our engines and in turn design your own training programmes.

Having invested to be able to provide a “one stop shop” solution to your customer creates a significant advantage. In the Agricultural sector, for example, gathering the crop in can often be at the mercy of the weather, and in the event of any machine issue being able to provide 24/7 coverage during critical times of the year such as harvest can be the difference between successfully gathering in a crop and having a field full of ruined produce.

In these circumstances, the farmer would be able to rely upon the OEM’s distributor network which would be fully capable of working upon the entire machine and in turn it may gear itself up to support its customer base in a different way compared to our network which is probably shut outside of office hours. 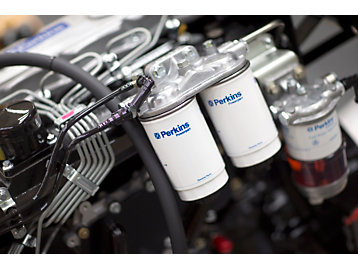 Blue smoke coming from your engine is a warning sign you can’t ignore. It’s never a good sign and could indicate a problem with your engine, so the sooner you address it, the lower the risk of causing lasting damage.

A range of ‘service kits’ has been launched by Perkins for its electric power (EP) engines. Providing end users with all the parts they need to carry out 500 hour and 1,000 hour services for most standard EP engines.