Perkins is the power of choice for Wauiquiez 43 Ganesh

Perkins has completed the re-power of Ganesh, a Wauiquiez 43, through their distributor Parts & Power Ltd in Tortola. Cruising World Editor-At-Large, Gary “Capt’n Fatty” Goodlander, has replaced the 30+ year old Perkins 4.154 with a new Perkins M92B.

Capt’n Fatty and his wife Caroline are well into their third circumnavigation, where reliability is vital, and they have reported that the new engine may have saved their lives already.

“At the height of our recent gale, I managed to claw down the jammed storm stay sail at dawn, which was very good in one sense but not another. We needed to heave-to, if we remained sail-less and sideways, we'd surely roll within minutes. I checked for sheets and lines overboard, and hit the starter button. The Perkins immediately sprang into life, and powered Ganesh directly into those powerful, giant, deck-sweeping 20 foot plus seas, without a problem and at a mere 1900 rpm.” Gary “Capt’n Fatty” Goodlander

The crew of Ganesh have increased confidence in having a low speed, high torque, long-lived engine when they need it.

Parts & Power would like to thank all the local BVI businesses that assisted with making this project such a success.  BVI Yacht Charters, Tui Marine (the Moorings/Sunsail) & Village Cay Marina all assisted in making the installation go smoothly.  Thanks also to the BVI Customs Department, and Controller of Customs Wade Smith, in making Capt’n Fatty and Caroline feel welcome.

Capt’n Fatty with Ganesh, which has been re-powered with a new Perkins M92B 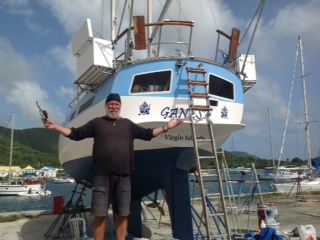 callSign up for the newsletter