The pre-deployment checklist for a U.S. military unit includes a multitude of things. Near the top of the list is a practical shelter in which the troops can work, eat and sleep when they’re in the field. In the past that might have meant a simple canvas tent or an improvised structure of some sort, but things are different today and deploying units can choose from a range of high-tech shelter options.

These packages typically include a frame or air-supported shelter, a stand-alone electrical power source and an Environmental Conditioning Unit (ECU) to provide heat and/or cooling as required by the operational environment. One of the most advanced systems combines all three elements in a single trailer that can be towed by the ubiquitous HMMWV and erected quickly virtually anywhere.

Hercules Manufacturing of Massilon, Ohio builds the diesel-powered generator sets used in this package and supplies them to Dynovis, Inc. of Fairfield, Virginia who integrates them with the other elements in the package. Their XGT family of support trailers combines generators and environmental conditioning units (ECU) with user-friendly shelter stowage and handling systems to minimise set-up time and effort.

“When you consider the mission, which is to give our troops who are operating in some of the most difficult environments in the world protection from the elements and a bit of comfort, everything we do has to be world-class in terms of performance and reliability,” explained Hercules president, Doug Brinkley. “Our engineering and manufacturing teams take that responsibility very seriously and their commitment is reflected in the generator sets they build.” 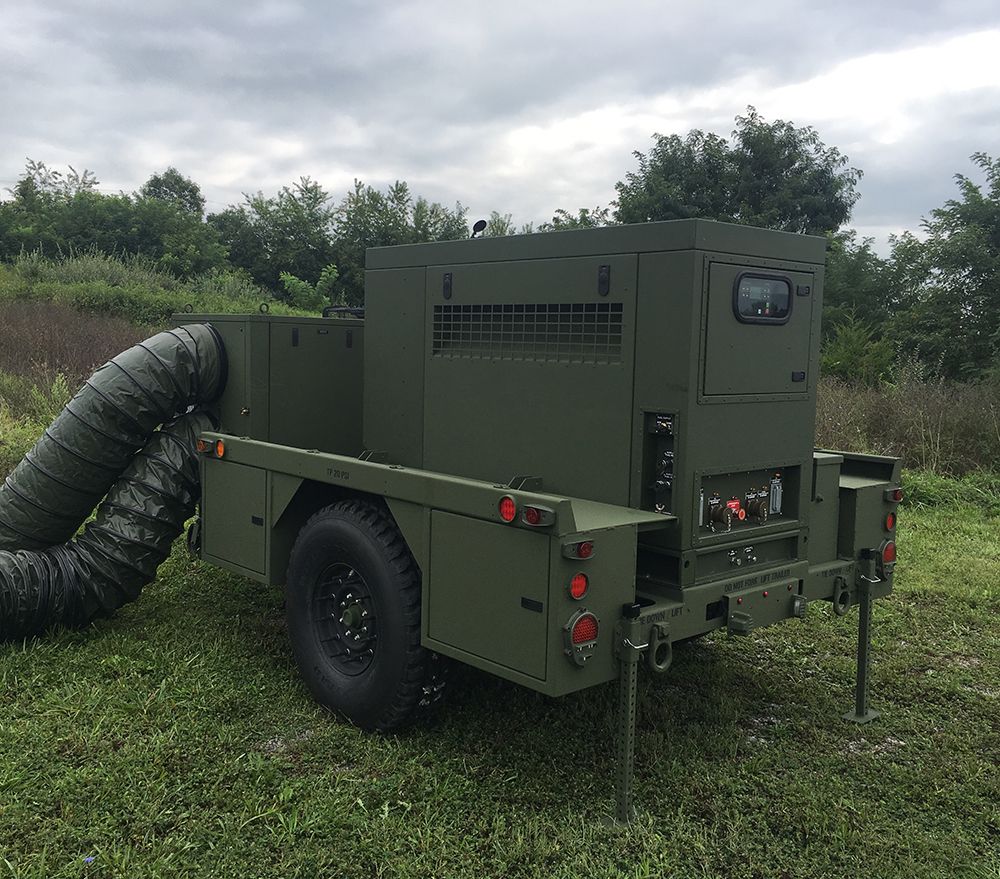 The generator set Hercules supplies for the XGT trailer system produces 30 kW of 120/208 V, 3-phase, 60 Hz power. It has two 208V/60A outlets, two 120V/20A outlets and a 24V DC electrical system with an 85A alternator. The generator set provides power to the trailer-mounted ECU that produces 60,000 BTU/hour of cooling or 18 kW of heating for the shelter.

“The power quality requirements are extremely stringent,” Doug added. “The generator set has to respond very quickly to a full load with minimal change in frequency to meet the military standard.

“It’s really a measure of engine responsiveness which is determined by several factors including the fuel injection system performance and even the weight of the flywheel. Obviously, selecting the right engine for the generator set was critical to meeting the military’s performance requirement.”

“Hercules is unique because we are both a Perkins dealer and an original equipment manufacturer (OEM),” Doug continued. “We did not select the Perkins engine because we are a dealer, but the relationship certainly has helped smooth the development process.

“Our Perkins distributor is Clarke Powered Solutions and we deal with their Cincinnati, Ohio branch. As a Perkins dealer we get parts and service from them, and as an OEM customer we buy engines from them. It sometimes makes for very interesting conversations, but the relationship is strong and productive.”

The Perkins® 404D-22T engines used in Hercules’ generator sets are built in Griffin, Georgia, which is an important consideration for equipment destined for the U.S. military. They are shipped with 12 volt electrical systems which Hercules modifies to the 24 volt military standard.

“We replace the fuel actuator, oil pressure and coolant temperature sensors, glow plugs, alternator and starter,” Doug said. “Everything else is stock standard. We then marry the engines to the generators, mate the assembly to the base and connect the plumbing and wiring as necessary.”

The prototype generator set was sent to Clarke Powered Solutions for an application engineering audit which is required before Perkins warrants the engine in a specific application. Clarke engineers test for correct airflow, proper cooling and other factors that impact the long-term performance of the engine before certifying the application for warranty coverage.

“The Perkins warranty, and the global Perkins support network, are important selling points for these systems,” Doug noted. “The Perkins® 404D-22T is a well-proven engine with an outstanding reputation for performance and reliability and the fact that it’s supported with local parts and service virtually anywhere in the world makes it an even better choice.

“The 404D-22T is also extremely quiet,” Doug continued, “which is important when the generator set is running just outside a shelter where troops are sleeping. We’ve made the generator set even quieter with careful design and judicious use of insulation in the enclosure. At full power it produces less than 65 dB at 25 feet, and that is well within the military requirement.”

Hercules also supplies the same generator set mounted on a skid/fuel tank assembly for applications that use a separate ECU or do not require one. The first two skid mounted units are currently undergoing an extended test powering a portable decontamination system.

“The generator set is powering a water heater,” Doug explained. “Hot water and decontamination solution are dispensed inside the shelter through integrated plumbing.

“While this is a military application, we believe there is a market for both trailer and skid mounted units with international rescue and disaster recovery organisations who often have to deal with the same environmental conditions as the military.”

Military or civilian, the ability to escape a high stress environment for even a few hours is a tremendous morale booster. The Hercules engineering and manufacturing teams are now prototyping larger Perkins-powered models that will bring that comfort to even more troops, first responders and relief workers around the world. 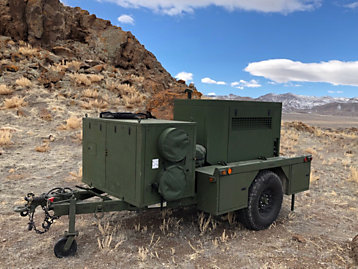 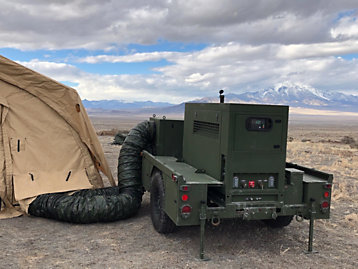 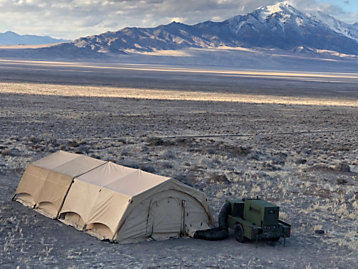 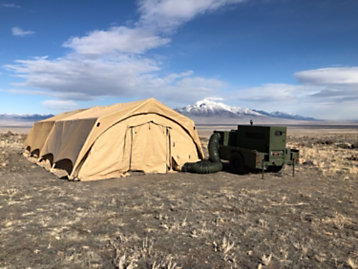