The engines that made Perkins

This year, 2022, marks ninety years of Perkins Engines Company Limited. During the company’s lifetime, more than 22 million diesel engines have rolled off our production lines, initially from the original Peterborough factory in the UK, and now from manufacturing facilities on four continents.

It’s nothing short of astounding that the company founded by two out-of-work engineers to design and build a diesel engine that could power a passenger car has become one of the world’s most recognisable engine brands. Their ambition was truly remarkable: they set out to design an engine unlike anything else in the market, not just in application but its size and operating parameters. They achieved it, too: the records may be hazy, but Perkins almost certainly has a claim to creating the world’s first true diesel-powered car.

Today, there’s a Perkins engine near you – in a generator, in a vineyard sprayer, in a road-sweeper, in an earthmover, in an ocean-going ship – powering a far wider range of applications than our founders could ever have expected.

In this anniversary year, Powernews dips into the company’s archives to look back on some of the engines that helped to define and shape the Perkins approach to power.

By 1937, just five years into the venture, Perkins was taking orders for nearly 2,000 engines a year and showing a profit, on paper at least. Exports too were increasing, and, with such good prospects, the company began not only to look for bigger premises but to develop its second-generation engine – a smoother, more powerful six-cylinder rather than the cruder four-cylinder debut model.

Incredibly, it took just five-and-a-half months to design, detail and build the first prototype. So impressed was the company’s board with the engineering team’s efforts that sign-off for production was granted after just a few hours on the testbed. It was a prescient move, for it was this engine, initially designated ‘Panther’, that would eventually have a significant and lasting impact – it remained in production until 1969 – for both Perkins and the diesel industry in its entirety.

For the board had also agreed to develop the Panther not just as a six-cylinder, but with the ability to create three- and four-cylinder options too. All three designs would use the same tooling and parts to create, for the first time, a family of diesel engines that provided the same compact nature and appearance as the then ubiquitous petrol-powered units.

Dropping the Panther moniker, the family eventually became simply the P6, P4 and P3. At launch, the P6 enjoyed unprecedented publicity as ‘the world’s lightest diesel engine’, offering customers a rating of 85 bhp at 2600 rpm from a unit weighing just 580 lbs (263 kg).

In June 1938, just six months after its launch, the P6 was a standard power unit for a list of truck manufacturers that reads like a who’s who of heritage brands, including Albion, Bedford, Commer, Dennis, and Thornycroft.

The P6 also marked the beginnings of the company’s marine interests, after the British Admiralty and the marine section of the Air Ministry both expressed interest in diesel power. Petrol engines increased the chances of fuel fires, while diesel’s greater efficiency would increase operational range. The engines would be fitted to light auxiliary craft, acting in support roles as seaplane tenders, air-sea rescue vessels and launches. Power-to-weight ratio was crucial for these craft; they were of a design that allowed ‘planing’ on the water surface above a certain speed. Too heavy an engine, and the boat would be too heavy to rise out of the water.

While the P6 in its ‘normal’ form could offer only 100 bhp, the ministry asked Perkins if they could increase output to 120 bhp without losing the power-to-weight advantage. Again, speed was of the essence – particularly as, by this time, the threat of war was real – and it took only four months to redesign the P6 as the S6(M). Although in ‘marinised’ form it was heavier than the standard P6, at 10 lbs/bhp the redesigned engine nonetheless offered a highly competitive ratio, and sea trials were satisfactorily completed. Later historical reviews suggest that Perkins-powered marine craft assisted in the rescue of more than 14,000 servicemen during the Second World War.

With the end of the war, while military orders for the P Series dwindled, Perkins was looking for new opportunities. 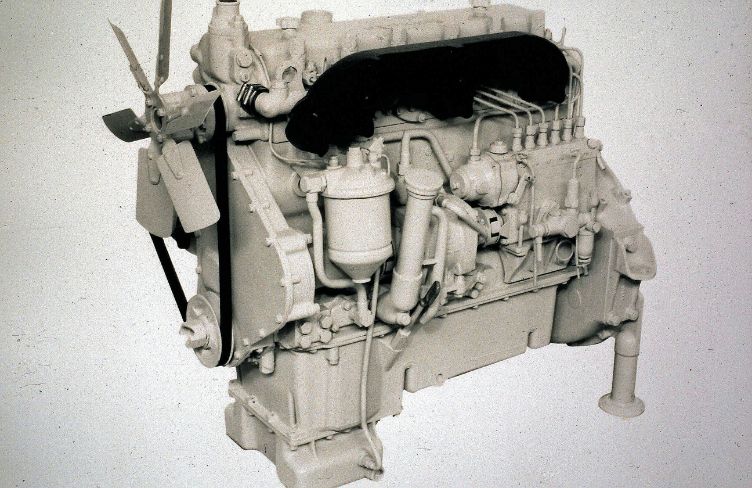 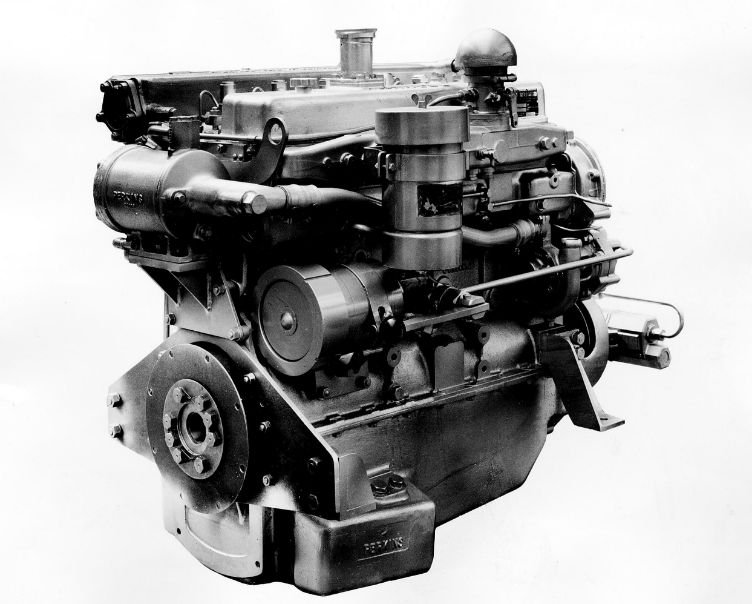 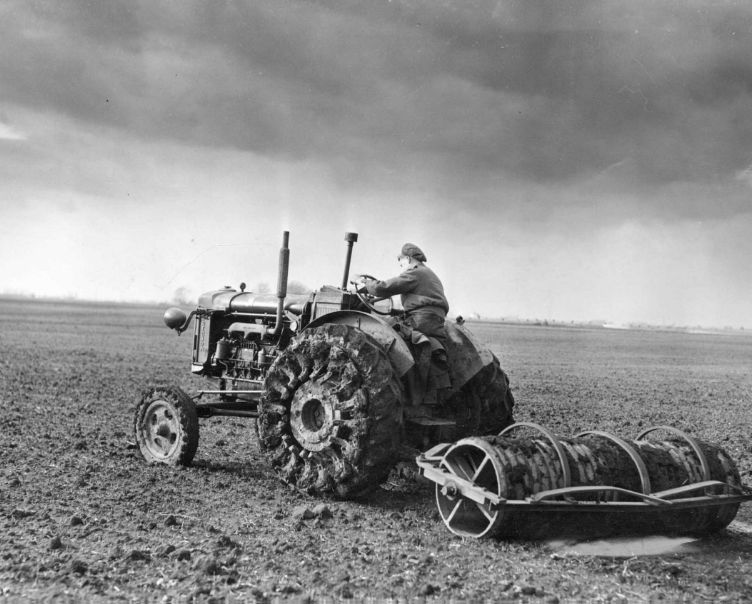 Fordson had produced what many regarded as the UK’s most important tractor during the Second World War. From its plant in Dagenham, UK, more than 136,000 Model N tractors were built. In 1945, the model was upgraded as the E27N, allowing farmers to purchase – for the first time – a tractor equipped with three-point linkage, power take-off, full electrics and a variable-width front axle. However, these new features only served to highlight the underpower of the original engine, a 27 bhp petrol unit.

The P6 was an obvious substitute and, in 1947, Perkins procured a second-hand E27N in which it would test the P6’s effectiveness. Content with its performance in trials on the founder’s farm, the machine was eventually shipped back to Ford for their assessment. They didn’t hang about: in 1948, the 45 bhp P6(TA) became available as a factory-fitted option – with the Perkins badge firmly affixed to the front radiator – while existing owners could opt for a dealer conversion.

If Fordson found success with the P6, so too did other tractor manufacturers with its series siblings. British car manufacturer Morris Motors launched its Agricultural Division in 1948, under the Nuffield brand. Its petrol-powered ‘Universal’ tractor was intended as a more powerful tractor than the Fordson Model N, but the P4(TA) quickly found favour as a conversion. And with both Ford and Nuffield now offering Perkins power, Ferguson wasn’t to be left behind.

The TE-20 – often known as the ‘grey Fergie’ was arguably Harry Ferguson’s most successful model. Produced between 1946 and 1956, more than 500,000 were built at the famous Banner Lane plant in Coventry, UK. As with its competitors, the first TE20s ran on petrol; Harry Ferguson was reportedly not a diesel enthusiast. But the P3 engine variant was now close to production and from prototypes in 1951, production began in 1952. While Ferguson eventually acceded that a diesel engine was well-suited to the grey Fergie, he initially chose a standard unit instead. However, heavy modifications were needed to ensure its fit, which meant that existing tractors could not be retrofitted with the ‘official’ Ferguson diesel. This opened a significant conversion opportunity for Perkins, given the number of Fergusons in use, and the P3(TA) gained a loyal following. Ferguson would eventually offer its own diesel conversion in the form of the TEY-20 variant.

By the time Massey Harris – by now using Perkins engines in its combine harvesters – and Ferguson completed a merger in 1953, the P3(TA) was well on its way towards becoming the longest-living Perkins product of all time: it would continue in production for another 50 years. Arguably, it also contributed towards the purchase of Perkins by Massey Ferguson itself in 1959, further consolidating the choice of Perkins power across the Massey Ferguson range – and leading to the later models that would begin the company’s domination of the agricultural and tractor markets.

But that’s for another edition.