Agri-tech is commonly described as the ‘Fourth Agricultural Revolution’, heralding increasing productivity from our agricultural activities. So how might agri-tech affect and shape the next 10 years of developments in farming machinery?

Providing an insight for Powernews readers is Andy Newbold, editor of Tillage & Soils and Precise magazines, and past president of the Institution of Agricultural Engineers. Here, he shares his thoughts and observations gleaned from a career in the field of innovation in agriculture.

“Evolution in agricultural practice is nothing new,” says Andy. “Agriculture is one long story of our constant desire for innovation and improvement. It pits human ingenuity against nature’s sheer unpredictability, but every crop of corn that’s ever been grown has added to the collective benefits that experience delivers.

“Yields and efficiencies have soared to levels unimaginable even a century ago,” he points out, “but you don’t need to be involved in agricultural activities to be aware of the current mood music. Everyone’s expecting methods to improve.” 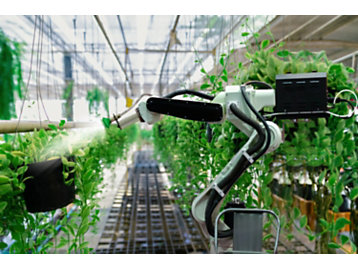 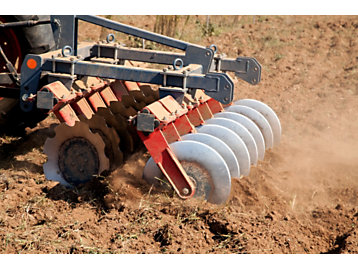 Agriculture’s no stranger to change. Our ancestors’ transition from hunter-gatherers to settled farmers marked the ‘First Agricultural Revolution’, the arrival of mechanisation drove the ‘Second’, and the ‘Third’ gave us the fertilisers and chemicals needed to deliver the yields needed to feed a burgeoning world population. Does Andy think a ‘Fourth Agricultural Revolution’ imminent?

“Right now, the focus is on what technology can deliver,” he says. “Sensors, artificial intelligence, robotics, imaging, connected devices, data analytics - even the meat-free burger – are all touted by manufacturers as promising further advances in yield, efficiency or profitability.

“Vertical, or indoor farming, is increasingly featuring as part of this ‘Agriculture 4.0’ agri-tech vision within machinery shows,” says Andy, “but while it’s an interesting development for particular crops and certain regions, I don’t think anyone doubts that agriculture will always remain a largely outdoor, land-based, soil-focused activity.

“So we ignore further mechanical advances at our peril.”

Agriculture, especially tillage agriculture, remains reliant on the tractor, Andy points out. It’s a machine that, at its most basic level, has changed little in 100 years: it was designed as, and remains, a self-powered vehicle to deliver high traction at low speeds.

One of its most notable advances was Harry Ferguson’s three-point linkage. “With its universal adoption by every tractor, it is now incredible that there was once competition for hitch systems between manufacturers,” says Andy. “Imagine walking around one of today’s machinery shows and the choice of implements being limited to those available from each tractor manufacturer!

“Of course, the three-point hitch wasn’t just about having universal implements,” Andy acknowledges. “Ferguson designed the three-point hitch around the plough. His design ensured that resistive forces generated by the plough were transferred to the tractor’s rear wheels as downward force. The tractor enjoyed a more favourable power to weight ratio as a result, making a smaller tractor more productive and economical to run.”

Over the last 80 years, advances in engine design, transmission, driven wheels, electronics, implement control and – not least – operator comfort and safety – have all added to the agricultural tractor’s abilities and appeal.

As to the developments in farming machinery that will emerge over the next decade, Andy says his expectations are for incremental change, rather than radical. “Manufacturers’ themes at shows are beginning to trend around some common areas: how we manage the soil, how we manage crops, and how we manage the machinery itself.”

A regular Agritechnica visitor like Andy can’t have failed to notice another machinery trend: size. There’s a dichotomy between the ever-increasing bulk of farm machinery and the recognition that we must look after soil.

“Even Ferguson was alert to soil compaction risks; that was with a two-point plough, attached to a tractor weighing little more than one tonne. Now we’re pulling 12-furrow ploughs with 25-tonne tractors.” 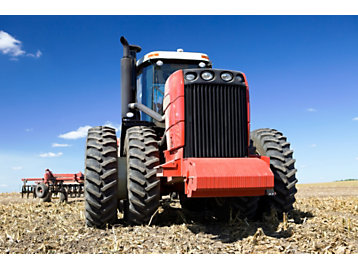 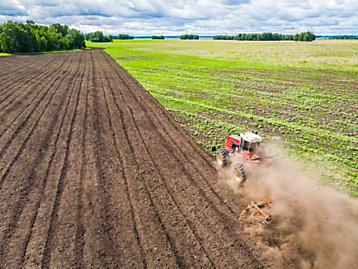 But there’s a bigger concern. Agriculture is a major contributor to greenhouse gas (GHG) emissions – as much as 24 percent of global emissions, according to the UN’s Food and Agriculture Organization (FAO)1. Soil acts as a massive carbon sink, so intensive cultivation such as ploughing can release vast quantities of carbon – as much as three tonnes per hectare, according to the Farm Carbon Cutting Toolkit2, a farmer-led group that provides advice to help farmers act on GHG emissions.

“In the UK, the National Farmers Union has committed to the ambitious goal of making agriculture ‘net zero’ by 2040,” Andy notes. “It’s cited actions to reduce the need for cultivations as an example of what farmers can do.

“Implement manufacturers have responded to farmers’ switch to minimum or zero tillage system, and this will likely reduce the demand for powerful, but large and heavy, tractors. That may lead further changes in how farmers approach field-based tasks with machinery, something which engine manufacturers need to keep abreast of.” 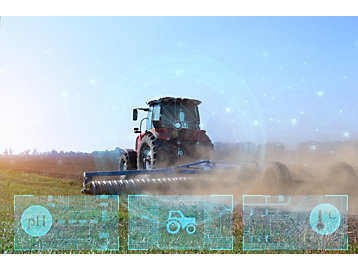 One of the most exciting developments over the next decade is likely to be how tractors and implements communicate. While the adoption of ISOBUS has been valuable in standardising connections and interfaces – another three-point linkage moment – with the standard in place, further opportunities arise.

“There’s been a big buzz about Tractor Implement Management (TIM). This ISOBUS-based system gives an implement control of a tractor for functions such as PTO, ground speed, steering, and lift, by communicating with the engine ECU,” explains Andy.

“Using TIM, an operator no longer has to repeat ‘stop, open door, close door, start’ while making round bales, for example. The tractor and implement do it automatically.

“A power harrow could sense soil conditions, instructing the tractor to go more slowly or speed up the PTO to maintain a consistent soil crumb across the field.”

Developments like these, evolving existing standards while maintaining a degree of backwards-compatibility, allow creeping adoption of innovation, rather than forcing farmers into a wholesale switch or the VHS v Betamax risk of betting on the ‘wrong horse’.

“I think there’s a strong possibility that a ‘hybrid’ could emerge, with a ‘standard’ tractor having both driver and driverless modes,” says Andy. “An operator would drive it to the field before switching into a pre-programmed driverless mode to complete a task with a TIM-enabled implement.”

Battery-electric tractors have made several concept appearances at recent events. But practical problems remain, not least battery power and the challenge of charging. “While they look great on the stand, to operate a 500 hp tractor electrically, at 50 percent engine load for 12 hours, would – using existing battery technology – need a battery weighing 15 tonnes.

“For the moment, electric power won’t replace diesel – certainly not as a like-for-like on heavy field operation equipment – but we’ll likely see it being integrated with certain tractor power functions alongside the diesel engine,” suggests Andy. 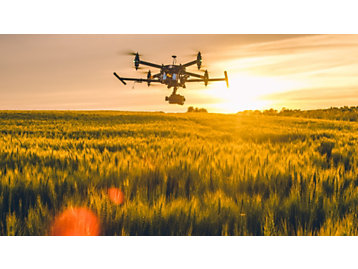 Electrically powered autonomous robots provide one example. Rapid advances in robotics and data analytics make it possible to map a field, then use artificial intelligence (AI) to view the imagery and record where weeds are growing.

Also coming to a field near you is the drone. Besides weed-spotting, European farmers use them to map fields for soil type and fertiliser application, although legislation doesn’t allow their use in aerial spraying. But in China, where thousands of drone ‘pilots’ have been trained, whole fleets of drones fly in formation, spraying millions of hectares.

“At Agritechnica Asia, drone manufacturers are one of the most well-represented categories,” says Andy. “The latest models can map fields, distribute seeds, spread fertilisers and apply pesticides.

“With a 10m spray width and unmanned work rate of up to 20/ha per hour, drones look set to become a viable agricultural workhorse for some parts of the world.”

Andy says ten years is a relatively short time in agriculture. “Change can be slow. If buying new, farmers expect to keep machinery for up to 12 years, tractors perhaps 15. Then of course there’s the used market, which means there can be quite a lag before new ideas seen at the glitzy shows ever see significant levels of penetration.

“I think even with the current enthusiasm surrounding agri-tech, it’s likely to be a case of evolution rather than revolution.” 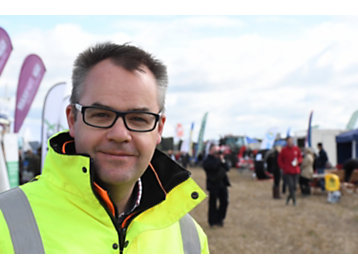 Andy is a fellow of the Institution of Agricultural Engineers (IAgrE), a past president and a chartered engineer. He co-authored the AHDB Soil management for arable crops guide, edits Tillage & Soils and Precise magazines and is the event manager for Tillage-Live, ScotGrass and the National Sprayer Demonstration.